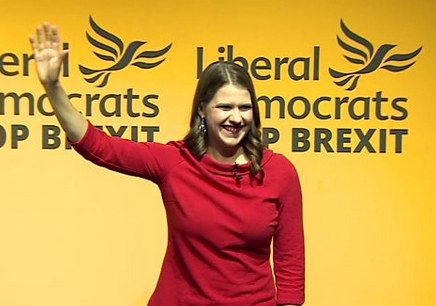 As the youngest of all the major party leaders, and the first woman to lead the Liberal Democrats, Jo heralds a new era in UK politics.

“When I joined the Liberal Democrats at 17, I never imagined that I would one day have the honour of leading our great party.

“Tomorrow, Boris Johnson is likely to take the keys to Number 10 and set us on a path to a damaging no-deal Brexit. Stopping Boris, and stopping Brexit is my number one priority as leader.

But Brexit isn't the only thing Jo has set her sights on. She has also set the party on the path towards tackling social injustice and tackling our climate emergency head on.

"...the system we have isn’t working for people or for our planet.

If you work hard and play by the rules, you should expect to earn a good wage, have a roof over your head and food on the table – that’s the social contract, and in the UK today it is fundamentally broken.

We have families where both parents are working full-time on the so-called National Living Wage but who can’t provide the basics for their children – I’m talking about food, school uniforms, a warm home.

And a planet that is at breaking point. We are the last generation who can act to stop catastrophic climate change, and yet the government is failing to take the urgent action we need."

"If we want to defeat nationalism and populism, we need to give people an alternative vision for a richer, greener, safer and more loving country.

Because when all that Farage and Johnson can offer is hate, we should give people hope."

We look forward to welcoming Jo to Bournemouth in September for her first party conference as leader.